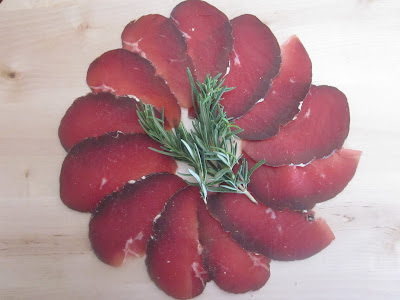 I gave everyone a break by posting about Lardo from Tuscany. I'm going back the Sudtirol well with this. Bresaolina di cervo is a small bresaola made from venison meat. This is one of the salumi I actually ate at a restaurant called Tubladel in Ortisei. It was soooooo good, I had to reproduce it, or at least try. What stood out to me while eating it was the pungency of the smoke. Quite obviously achieved with the use of juniper wood. I asked the server how it was made. He returned after a brief consultation with the chef(I guess to get permission) and told me it varied from producer to producer as to what was used, but, rattled off a bunch of things that ARE actually used, like rosemary, sage, marjoram, caraway, bay, nutmeg, juniper and anise were those I remember. Then he told me it is cold smoked for several hours a day over the course of the week with juniper wood..........of course. At least I now had a good point of reference. The first time I was to attempt it, the venison wasn't butchered quite well enough for me, so it became the Kaminwurzen, about which I posted previously. In the meantime, Jason and I discussed what he should do with his nice cylindrical piece of venison. So, he went ahead and stole my idea. ;) I'm glad he did, his looks amazing. However, he did not smoke his.
Finally, my cousin showed up on New Year's day with 4 good looking "roasts," which are ubiquitous with venison hunters/butchers. I'm beginning to learn the "roast" is the entire deer anatomy outside the "backstrap" in that world. So, I really don't have much of an idea what part of the animal it is. Gun to my head, I'll say it's from the leg. When I got them defrosted, all 4 small pieces were suitable for my application. I went ahead and cured them with salt, black pepper, caraway, bay and cure #2. They only took a little over a week to cure. I rinsed them and stuffed them in beef bungs. For the smoke component, I tried something different. I've been using the pro-q cold smoker for quite a long time. Recently, I bought a new cold smoke generator called the a-maze-n smoker. I was perfectly happy with the pro-q, but, I kept getting in trouble with wifey because there was candle wax everywhere from the tea light used to light the pro-q. I'd also received an earful for dipping into her tea light supply. Jason just informed me about this new device the day before, and when I saw that the a-maze-n came with a mini torch with which to light it, I impetuously bought it. No more wax trouble. In a nutshell, this is the cold smoke generator I used to smoke the bresaolline. I used a mixed harwood sawdust along with some crushed juniper berries which I added to the sawdust. (side note: I think I finally found some juniper sawdust). What's different about the new smoke generator as opposed to the pro-q is that it can be lit from both ends, producing twice the smoke. Having cold smoked several salumi with the pro-q, I can state that the smoke flavor is very subtle, barely noticeable. Which is nice, especially for 'nduja. However, the smoke flavor I tasted in Sudtirol is much more aggressive, yet, still not overwhelming. Still......very smokey. That was my intention. So, I lit both ends. It smoked, a LOT. That reduced my smoking time from 12-14 hours down to about 8 hours per day. My notes say I put 40-45 hours of smoke on these, about 4 days. They were then hung in my chamber. Keep close watch, they're so lean, they only hung for about a month. I put them in on February 2 and pulled them out on March 3. As you can tell from the pictures, they look terrific. As for the taste, I could tell the minute I opened them that I hit it out of the park. I could smell that same pungent smoke I have been after. A couple of thin slices confirmed it. It was exactly the smoke flavor I remember tasting at Tubladel. Still apparent were both the bay and caraway, so I think I nailed it. Even have that really nice smoke ring on the outside as well. If you have venison in the freezer and don't what to do with it, wonder no more!
Posted by scott at 9:01 AM