Here is the gigantic piece of 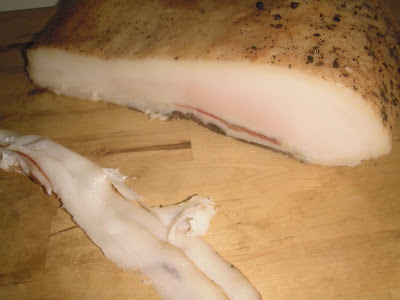 Lardo that's been sitting in my chamber for 3 months. This stuff is just silly. Look at that lovely rose colored hue running right through the middle of it. I was concerned that it wouldn't be cured, I only left it to cure for 3 weeks. I also dried it as I would any other salumi, bearing in mind I don't have the unique marble coffin used in Tuscany for just this application. But, I am relieved to announce it is just fine. In fact, more than fine. It's terrific. I think God put these piggies on earth specifically to cure, I can't imagine they serve a better purpose than this. As I wrote prior regarding the coppa and how it melts in your mouth, the Lardo is even more unctuous, if that's possible. I sliced some paper thin to put on bruschetta. I toasted the bread and while it was still warm added the lardo. It was drizzled with top notch olive oil and cracked pepper. By the time I got to it, the lardo had begun to melt into the bread..............sick. There is one small caveat with this stuff. But, this goes for all salumi. I sliced a little with a knife that was a bit thicker than the with the machine and I didn't care for the mouth feel, it was a bit challenging. Again, this is true of all salumi. Sliced thinly on bruschetta, I made a whole lot disappear. Another small bit of advice when playing with Lardo. Prior to slicing, remove it from the chamber and either into the refrigerator for a couple hours or into the freezer for a couple minutes. This will make it much easier to slice. Otherwise, it will get really soft and be a pain in the neck to slice correctly. As you can see by the picture, it was starting to sweat a little. Doesn't take long, maybe 5 minutes. Mangalitsa guanciale is up next. 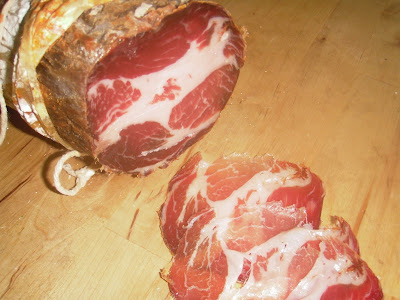 This is some fabulous stuff! I now understand what all the fuss is about. This was cured with the hot pepper powder and fennel seeds. It hung for roughly 6 weeks. I cut it down right at 30% weight loss. In this case, I think the 30% was perfect. The fennel seed and hot pepper powder really seemed to mellow and faded into the background as the pork was really able to stand out. What really makes this stuff ridiculous is it's unctuousness. Sliced paper thin, it actually melts on your tongue. This coppa was perhaps a bit too salty, but, that's hardly a complaint. Overall, I really couldn't be happier with this effort. Really, really great stuff.
Posted by scott at 8:13 PM 7 comments: 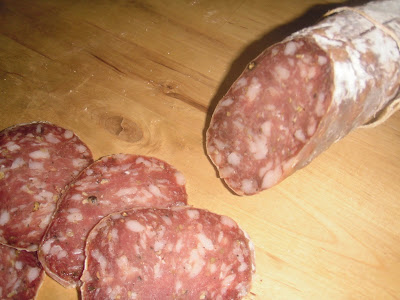 This is the most recent salame. I just pulled it down yesterday. By looking at it, I can honestly say, this is the best looking salame I've made, technique wise. You can see there aren't any holes in the forcemeat at all...........perfectly solid. The fat definition is great(in my opinion anyway, you're welcome to disagree), absolutely ZERO smearing. As for the tasting, it has a really nice black pepper heat to it. The anise is certainly present, but doesn't interfere. The garlic provides a pleasant backdrop, while the vermouth while mellow to begin with, has really fallen to the point where it's just an intriguing last taste. I think vermouth in salame is a great idea. I know that there are some who complain that raw wine leaves an unpleasant taste and choose to cook it down to rid it of this. What I think I've found with the vermouth is that you can use raw wine and it won't interfere with the flavor, yet still provide the gentle acidity for which you're looking. Overall, this is a REALLY good salame. With only 4 ingredients(aniseeds, garlic, black pepper, vermouth), I really couldn't ask for a better tasting(or looking) salame. The Mangalitsa salumi are ready and will be posted about this week.