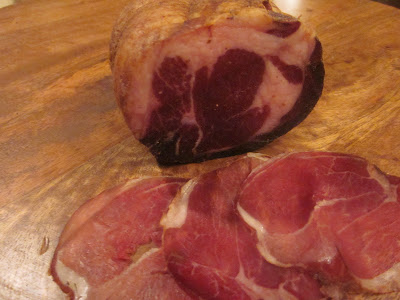 a. This was an unplanned item. Initially, I was summoned by my friend at his salumeria to retrieve a couple wild boar shoulders to make salame di cinghiale. When I arrived, I found these shoulders to be perfectly cylindrical. So after brief deliberation, another experiment was hatched, we decided to make 2 coppe. I'd never seen it before and I was interested. I returned home and everything fell apart.....literally. Well, that's a slight overstatement, only 50% fell apart. What I mean is, I removed the netting around the first shoulder and it fell apart. Very poorly butchered, looks like maybe the first time this individual butchered anything of ANY kind. But, no biggie, I would give it a shot regardless, cure it and tie it tightly prior to casing should do the trick. The second shoulder was a dream. The picture above is, in fact, the latter. Coppa #1 was cured with juniper, rosemary and fennel seeds. Coppa #2 was cured with hot pepper powder, crushed red pepper flakes and fennel seeds. Man, now that I'm typing it out, and looking back in my notes, I think I have a small obsession with fennel seeds. They were both cured for 2 weeks. Due to their stoutness, I had to use a couple 100mm collagen casings to case them. I hung these right before I left for Italy on 9/15. I figured I would return and they would be perfect. Live and learn they say. I didn't pull these until about 10 days ago. Took 2 months for them to achieve the requisite 30% weight loss, and they're both still soft, a bit softer than I care for, but, 2 months is plenty. I brought them to the salumeria of record for tasting and they both passed muster. Coppa #1 is awesome. The crushed red pepper flakes made the difference in heat. I usually only add the hot pepper powder and that mellows with time. The flakes, however, did not. I made this to emulate the wretched "hot gab-a-gool" of anglicized Italian and "Sopranos" infamy. Well, I'm sure that more than one track suit clad gentleman would enjoy this and be completely ignorant to the fact that it is cinghiale. Coppa #2 is delightful as well. The transcendent flavor here is rosemary. But, I am as big a rosemary freak as I am fennel. Case in point, during our stay in Chianti, there was a large rosemary hedge right outside our apartment. Every time I passed by the hedge, I made sure I rubbed some part of my body on it, thus filling my car with rosemary perfume. I'm serious, EVERY time. Anyway, this coppa was very good as confirmed by my friend. This was the coppa that had to be tied up prior to being cased. As I cut through the end of it, it looked just fine. However, I cut into a little more to mete out my friend's portion and it was then that you could see the air pockets created by the poor butchering. Good thing is, no internal mold. Success all the way around, and everyone was happy. I will probably shoot out a bunch of new posts in rapid fire succession. I have 11 new projects since I've returned from Italy(inspired?), including 2 big speck projects(one cold smoking outside as I write), 2 lonzini(one cold smoked), a bresaola, Salame Toscano, and Salsiccia di Calabria. Just yesterday, I took a ride up to Mosefund Farm to visit Michael Clampffer who was nice enough to invite me to observe Kristoph Wiesner conducting the Mangalitsa class. He also gave me a bunch of meat to play with. So, I now have another Mangalitsa Lardo and guanciale curing. Today, with the scraps I made 10lbs. of 'nduja(which seems a bit extravagant with this pork) and 5lbs. of salame felino. Been a bit busy, it seems.
Posted by scott at 9:03 PM 6 comments: 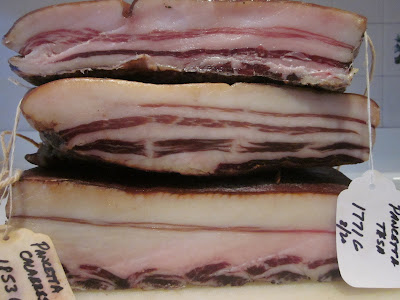 These are the other 3 quarters of the whole side of pig I acquired from Michael from Mosefund Farm back in August. The other quarter became that lovely slab of bacon about which I posted on August 23rd. From top to bottom are Pancetta tesa, Pancetta Calabrese and Pancetta affumicata(bauchspeck or speck belly). The Pancetta tesa on top was cured with juniper, thyme and bay. I didn't do anything out of the ordinary with it. Due to it's size, I left in to cure for about 12 days. It was removed, rinsed and hung to dry. The Pancetta Calabrese was cured with fennel seeds and hot pepper powder. What I did differently with this was in the rinsing process. This is a DOP item, so all the literature about it points to the fact that it is cured simply with peperoncino powder. I used a little Norcino license and added some fennel seeds. After the curing process, it was rinsed with water and red wine vinegar. It is then recovered with peperoncino powder. It is then dried for a minimum of 30 days. The pancetta affumicata was cured with juniper, thyme, bay and caraway seeds. Why the caraway? I was shooting for flavors typical of the Alto Adige, South Tyrol, in particular, and even more specifically Val Gardena. My wife visited Ortisei in the Val Gardena last year. She returned with a small cookbook from the area. Caraway was by far the most pervasive aromatic used in the cuisine. From bread to meat, it is used in just about everything. Knowing that I was to visit this very place a month after I made it, I wanted to return and try my own pancetta affumicata to see how it measured up. See my previous post for the whole dissertation on the speck vs. pancetta affumicata thing. I cured this for the same amount of time as the others, 12 days. After the curing process, I left this out at room temperature for 2 hours to develop a nice pellicle prior to cold smoking. This thing got about 25 hours of cold smoke on it over the course of 5 days. I used a mixture of apple and cherry woods. In the Dolomites they use juniper wood for the cold smoking, which I've been in the process of tracking down for months to no avail. The cold smoke was applied using a nifty little gadget called the pro-q cold smoke generator. It is an inexpensive, invaluable tool made in the UK for those without room for a gigantic Bradley smoker or something of that ilk. First time I used it, I forgot to remove the candle and came out to find the thing on fire, so, keep that in mind.......remove the candle! All three of these items were left to dry for about 60 days. As I had written previously in the bacon post, these were all cured in vacu-sealed bags, with inconclusive results, other than no leaks and no headaches from wifey giving me the business about said leaks. With regard to taste on these, this meat makes you look like a superstar. All you really have to do is not screw it up. It's very forgiving as you can make a ton of mistakes and will STILL taste good. The Calabrese has a terrific heat, of which I'm a huge fan. The affumicata is delightfully smoky, but, not overwhelmingly so, with hints of caraway and bay. I think I came pretty close on taste judging against what I ate while in the Dolomites. The smoke on theirs is so much more aromatic, I really need to find that juniper wood. The tesa is delicious as well, I use it as my "working" pancetta, for use in sautes, soups, etc. After working with this belly, I don't think I would go back to curing belly found in Asian or Latin markets, I feel like that would just be pissing in the wind. If you have the opportunity to use this meat, I recommend you give it a go.
Posted by scott at 5:59 PM 12 comments:
Newer Posts Older Posts Home
Subscribe to: Posts (Atom)