I suppose the Big Green Egg does perform as advertised. I was able to 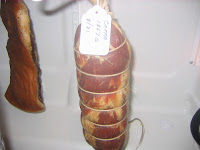 cold smoke this belly over the course of 3 days. It wasn't traditional cold smoke, mind you. I was only able to hold it at 100 degrees +/- 5 degrees. So, I smoked it for 4 hours a day for 3 consecutive days. The results of which can be seen in the picture. I used apple wood, also threw in some juniper berries wrapped in aluminum foil. The addition of the juniper berries really created some super fragrant smoke. I was pleasantly surprised how well it worked. I cut off a piece of the outside as you may have noticed, just to have a gander at how it worked and looked. Looks good, I think. Smells great as well. Off to the curing chamber for a couple months. I don't think I'm going 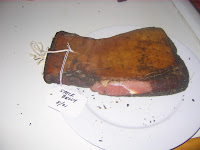 to wait the 22 weeks to have at this.

On to the coppa. For whatever reason, I forgot this thing was in to cure. So, I only left myself 24 hours to ferment and spray it. Regardless, a 10 day cure and it felt plenty cured. Stuffed it into a 100mm collagen casing. Sprayed with the obligatory M-EK-4 spray(which, I've seen has been renamed 600 mold or salami mould or some other nonsense) and set to ferment for 24 hours. I'm excited for this one as it is my first whole muscle coppa, and it looks very nice. FYI, you can see my tesa hanging right next to it. 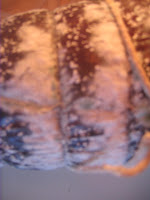 I don't know if you can see it, but, right in the middle of the picture, there is a good spot of green mold on my bresaola. THIS is exactly why I case my whole muscles and spray them with M-EK-4 spray. I'm baffled how this happened. I hung it less than an inch from my perfectly molded lonzino. My refrigerator is pretty well innoculated with good mold, having sprayed everything with good mold spray. Needless to say, this is the last time I omit spraying the mold spray. Nor will I ever hang naked muscles. I removed the bresaola and cut all the twine off. Then doused it with vinegar/water solution and rehung. I did all this 2 days ago, seems no worse for wear today. Also, as mentioned in my last post regarding this item, Hank is on the hook for 1 whole eye round! :)
Posted by scott at 7:05 PM 10 comments: 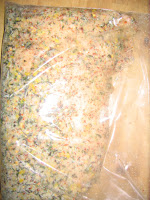 got this last big, juicy sucker in to cure. Not sure if you can make out from this picture what is in the cure. I blasted this old boy with lots of rosemary, the zest of 1 lemon, 3 big cloves of garlic, and an inordinate amount of chili pepper flakes, along with salt and sugar. I'm looking to get some real flavor out of this one. I gave the cure mix a taste. Deliciously sweet and plenty hot, with that lovely rosemary undertone. I hope this comes through in the finished product. I know it seems I may have over seasoned this, but, being that this was given to me, no strings attached, I'm really going for some personality aside from salty, porky goodness.

Well, I was finally 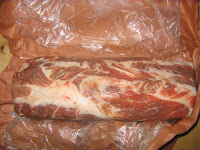 able to procure a coppa. Finding one of these has been quite enigmatic. Scores of butchers and several arguments later, I got one. Thanks to Tom from Marlow and Daughters in Williamsburg, http://tomthebutcher.blogspot.com/. I found the link at Larbo's blog, http://www.thislittlepiggy.us/, thanks to him as well. I work nearby the store and will now be a frequent visitor. Tom was nice enough to actually break the coppa down in front of me and explain as he went. The meat looks and smells fantastic. It is pictured in the top shot, well marbled and lovely. I got sucked in and had to buy a jowl while I was there, which is pictured two below the coppa. As I passed by the display case, a fat, juicy hunk of belly caught my eye, so I grabbed that as well, which would be the second picture. The final picture is of another nice hunk of belly given to me by a friend. 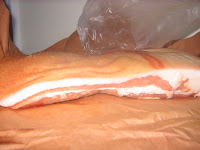 On to the curing. Especially with the meat purchased from Marlow and Daughters, I wanted to maintain some austerity. I want the taste of this pork to shine. I decided to go simply with salt, sugar, black pepper, juniper and garlic, with cure #2. With this nearly 2lb. jowl, simple guanciale is called for. I've made 4 or 5 of these already and have run the gamut as far as curing ingredients. However, I think my first attempt was my tastiest. That was salt, black pepper, thyme and juniper.....no curing salt. Again, 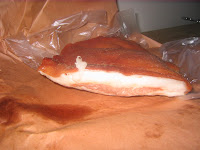 hoping that the jowl is of such high quality, it won't need much seasoning. I towed the line when it was time to cure the belly. Initially, this go around with the belly, I wanted to speck a piece, or, at least give it a shot. This is NOT the piece of belly I'm willing to experiment on. This has tesa written all over it. Very straightforward, went salt, black pepper, cure #1 and thyme. That's it. I shifted gears when it came to belly piece #2. I cut it into 2 separate pieces. With the first piece, I went back to the bacon well. The sage, ginger, garlic variety seems to be quite popular. More so than any of the other renditions I've made. With that 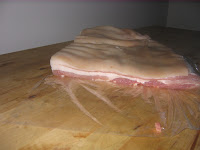 done, I took another trip to South Tyrol. This last piece is the piece I'm going to try and speck out. Went with caraway seed, juniper and bay leaf along with salt, black pepper and cure #2. All the belly pieces and jowl will cure for 1 week. I'm still unsure about how successfully I will be able to cold smoke the speck on the Big Green Egg. Worst case scenario, South Tyrol bacon. Also, not pictured is another semi frozen jowl given to me by yet another butcher. I'm tossing around the idea of jowl bacon and/or jowl speck. Let's hear ideas. 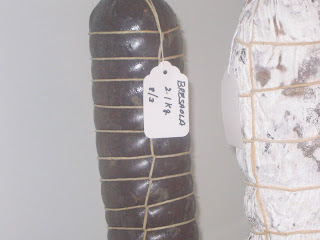 I cured this bresaola with South Tyrol in mind again. It was cured with fresh rosemary, juniper, fresh garlic, a scant bit of cinnamon and even smaller amount of clove. Where I thought I came up with something unique, it seemed eerily familiar. Then I checked http://curedmeats.blogspot.com/ and discovered it is exactly Jason's cure(minus the thyme.) Anyway, no biggie. Cured this old boy for 12 days. Cased in a 90mm collagen casing. What I did this time, out of deference to Hank(Hunter Angler Gardner Cook)http://www.honest-food.net/blog1/, was neither spray it with M-EK-4 mold spray nor ferment it. As you can see from the picture, it was hung next to the lonzino described in my last post that has become wonderfully moldy. As Hank says, if it wants to get mold on it, it will. If this doesn't work out, I guess Hank's on the hook for a whole eye round. ;)
Posted by scott at 10:55 PM No comments:
Newer Posts Older Posts Home
Subscribe to: Posts (Atom)