Mother of all Bacon 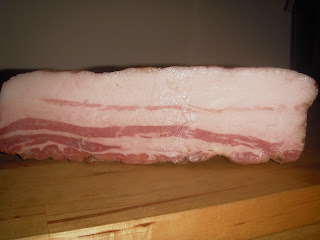 So, if the raw belly was "silly," then this bacon slab is just "Sick." These lovely slabs of deliciousness were treated with the utmost respect. Obviously, this is not pork belly you pick up in an Asian or Latin market. These are special, and deserve to be treated as such. This particular piece was cured with fresh ginger, sage and garlic to go with salt, pepper and sugar with a little cure #1. This has become my "go to" cure for bacon. As I know it works, I really didn't want to experiment with this piece of meat(refer to previously stated reasons). It was cured for 10 days. Usually I do a week, but, given the extra girth of this thing I gave it 3 extra days. For the first time, I decided to cure in vacuum sealed bags. I can't really be 100% as to whether or not this actually made a difference, but, at the very least, I didn't get in trouble for leaking bags in the refrigerator. Win-win. I removed it and rinsed it. It was dried off and set in front of a fan to develop a pellicle for an hour. While that was going on I had to get the hot smoke situation sorted out. Now, typically when I buy the $1.99/lb pork belly from a meat market/butcher, etc. (which have been absolutely awful, skinny and lean recently) I don't hold it in too high regard. I get out my $30 smoker, start a fire and throw some soaked wood chips on it. Smoke for 2-2.5 hours and remove it. Always works just fine. This time, however, I was NOT willing to disrespect this meat, as it wasn't $1.99/lb either :) . I set up my Big Green Egg. After quite a bit of tinkering, I was able to hold the temperature at 200 degrees. Only then did I introduce the soaked apple wood chips along with some apple wood dust. I babysat this sucker for 3 hours. A temperature probe was inserted after about an hour. Total smoke time was between 45 minutes and an hour. Total time on the fire was roughly 2.5 hours, maybe closer to 2 hours and 45 minutes. Took it off, waited 10 minutes and skinned it. Couldn't wait, I had to cut a piece off and try it. This meat really behaves differently than any meat I've ever eaten. I can't decide if the fat explodes or melts in your mouth, or both........explodes then melts. Either way, I can't say I've experienced it before. The worst part about using this meat is I don't think I'll waste my time with any other meat, seems useless. As for the rest of the belly, I made a Pancetta Tesa cured with thyme and juniper. Also, a Pancetta Calabrese cured with hot pepper powder and fennel seeds. Finally, a nice piece of Speck which was cured with caraway seeds, bay, juniper and thyme. The Speck will be cold smoked for a total of 20 hours, 4 hours for 5 days. N'duja also to be removed shortly.
Posted by scott at 7:13 PM 14 comments: 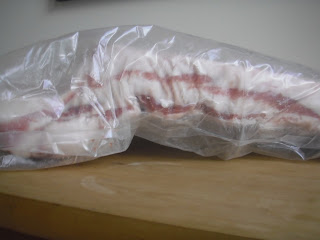 Silly in reference to this pork belly I procured yesterday from Michael Clampffer of Mosefund Farms. This is an 18lb. whole belly of a Mangalitsa pig. Looks more like the belly of a brontosaurus. Like a Fred Flinstone pork belly, almost comical, cartoonish even. I plan on breaking this into 4 sections of roughly 4.5lbs each. One pancetta, one bacon, one speck and I'm undecided on what to do with the 4th piece. Perhaps I'll do 2 different pancette....tese, of course. I don't think arrotolata is even a possibility due to the size of this thing. Anyway, sorry for the short post. I thought this was noteworthy based on the ridiculousness of it. More on this in a week or so.
Posted by scott at 6:19 PM 7 comments:
Newer Posts Older Posts Home
Subscribe to: Posts (Atom)