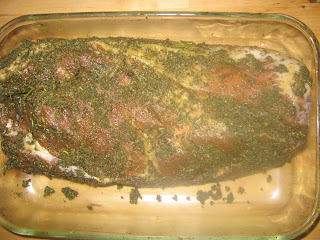 You're looking at a roughly 3lb. boneless ham(or portion thereof). Since the uptake of the actual prosciutto is both time consuming and intimidating, I decided to go with a boneless rendition of a Len Poli recipe. I have every desire to tackle the king of all cured meats, just not the ability to properly babysit an entire hog's leg for about a year. This will have to do......for now. Anyway, I went with a cure of fresh thyme, fresh garlic, coriander and fennel seed, along with the usual salt, pepper, sugar and cure #2. Poli's recipe called for a 5 day cure of 400-500g chunks. However, it looked in his picture like there were several chunks stuffed together in the ham stocking. I am choosing to cure it in one, solid piece for 10 days. As far as the drying, I'll play that by ear. Most likely, right around the time Mr. Poli suggests.
Posted by scott at 11:14 PM 2 comments: 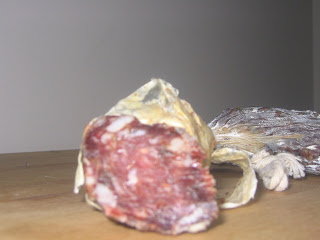 Pulled this one out today. This is a porcini, sage and dry marsala salame. This is in a 43mm collagen casing. I took some dried porcini mushrooms and ground them into a powder to be used a spice, along with some dried sage and dry marsala wine(sounds like a lot of "dry"). For all that dry, it still is a little wet, which is why I retured it to the chamber. But, not without first tasting it. If you think it sounds a little odd, it certainly doesn't taste it at all. This is my finest tasting salame to date(I don't have too many under my belt, so, take that with a grain of salt). it really tastes wonderfully. The porcini imparts some earthiness without being overwhelming(I was worried), the sage is a nice compliment to the porcini. There is just a touch of sweetness from the marsala wine. If anything, maybe a touch salty, but, this IS salted, cured meat................One thing was a little baffling about this salame, and that was from it's fermentation. It never seemed to really firm up, like I mentioned above, it's still not super firm, especially for having been drying for about a month. Regardless, this salame really is fantastic. I will update when I pull out the 2 60mm chubs still drying. I want to let them get really firm, we'll see. 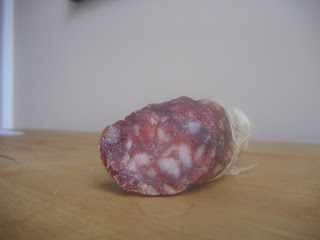 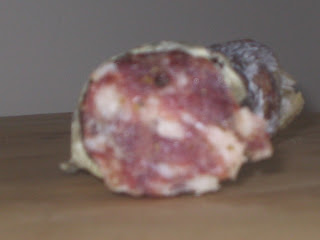 Removed a salame today. This one was made with Sicilan dried oregano, lemon zest, cardamom, and vermouth. Unfortunately, the cardamom was a bit cloying. It overwhelmed that lovely wild Sicilian oregano(wasn't cheap either). Oh well, the flavor profile seemed pretty good. Next time, more oregano, less cardamom for sure. The lemon zest and vermouth were proportioned correctly, I believe, maybe a touch more zest. The picture is of a 43mm collagen cased salame.

The 2 guanciali were removed after their 1 week bath in the aforementioned cure mixture. I removed them, but decided against rinsing them. I have done it both ways(rinsing and not rinsing) and found that not rinsing them created more flavor. I will remove all the bay 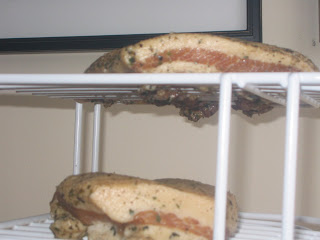 Braising is my favorite means of cooking. I think I've braised every type of meat in every imaginable way. One of my least favorite cuts to braise is bottom round of beef. In fact, I'm not the only one, in a quote from Cooks Illustrated, "This cut was the tester's least favorite. It was essentially devoid of flavor, and had a rubbery, chewy texture. This roast is not even worth the little that it costs." With that in mind, I figured I would give it one more shot(that, and it was on sale). I've made it in the past and found exactly what Cooks Illustrated found...........very little flavor. Anyway, thumbing through Paul Bertolli's book, "Cooking by Hand," I remembered he had a section on braising and found his Stracotto recipe. Since everything else I've made from his book seems to be dynamite, I went with his recipe. Bought a bottle of Valpolicella and marinated the roast. One problem, he calls for the use of saba or vin cotto, of which I have neither. I stumbled across a recipe for vin cotto in Mario Batali's book, "Molto Italiano." I cooked down some old red wine with some honey, cinnamon and cloves. This was used to deglaze along with the strained marinade. Long story short, it was great. I don't know if it was due to the marinade being applied to the meat hot, or the oven method, but, whatever, it worked, and well. Anyone looking to salvage the use of a cheap, otherwise dry cut of meat should definitely give this method a try.
Posted by scott at 10:07 AM No comments: 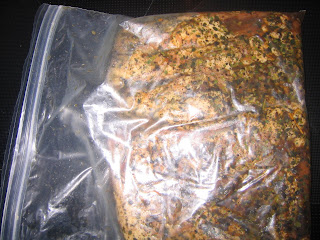 Like I mentioned earlier, got 2 nice, thick jowls from the butcher. Time to make more guanciale, this is my absolute favorite cured meat.

Spice mixture was ground up in mini food processor. It was then rubbed into the jowls. The jowls were placed in a ziploc bag with all the spice mixture added and shaken up to coat well. The bag was placed in the refrigerator where they will cure for about a week.
Posted by scott at 6:06 PM No comments:

Creation of this blog 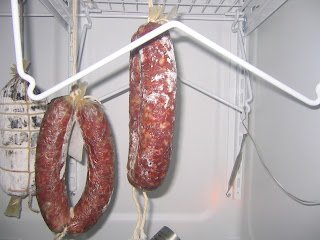 I decided to create this blog primarily in an effort to quit pestering others and hijacking their blogs. http://curedmeats.blogspot.com/, This gentleman, in particular. Thank you, Jason. Anyway, just hung some venison salami. I've developed a good relationship with my butcher after so many visits. He set aside a nice piece of lean shoulder roast for me along with 2 nice pork jowls. (all percentages in parentheses are percentages of the weight of total meat)

Lean and fat chilled to a touch under 32 degrees, ground together on course die of KA grinder attachment. Spice mixture was ground up in a mini food processor and added to the meat in the kitchen aid bowl. With the paddle attachment, the meat and spices were mixed at low speed for 2 minutes. The red wine was added at the beginning, the starter culture was added for the last minute of the process. The meat was then stuffed into 3 43mm collagen casings. The salami were sprayed with M-EK-4 mold mixture. They were then fermented in the oven with the door ajar and the light on for 48 hours at roughly 70-75 degrees(placed inside tupperware containers to maintain high humidity). They are being hung in my drying chamber at 52-55 degrees with 68-75%RH.
Posted by scott at 5:35 PM No comments:
Newer Posts Home
Subscribe to: Posts (Atom)