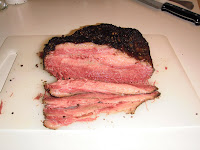 Sorry for the long delay in posting this. This is the pastrami, post steam. You can see how juicy it was. This was a home run. At first, I was hesitant to steam it at all. It tasted wonderfully frsh off the smoker. However, it was a bit tough and not easy to chew prior to steaming. The bath really mellowed out it's flavor perfectly and made it wonderfully tender, especially for sandwiches. This was quite a treat, it was devoured within a day. Highly recommended.
Posted by scott at 1:24 PM No comments: 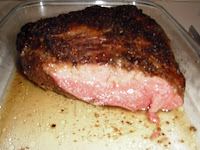 you that read here, this is probably somewhat of a surprise. Yup, I ventured outside the box. I can't explain why either. I walked by the butcher at the supermarket as they were breaking down these briskets. They were brought out and looked pretty good, actually. So, I got a bug up my ass to make pastrami. Threw it in a brine based loosely on Ruhlman's. 3 days later, she was smoking. Now, I'm not real good at this smoking thing, other than hot smoking the bacon(which anyone can do). I smoked it on the Big Green Egg, which, by itself can present temperature control issues. I read Ruhlman says hot smoke at around 180 degrees. I was shooting for 200. I soaked a whole bunch of hickory to get the fire really good and smoky, and it was. Threw it on right at about 200 degrees.........perfect. However. I removed my T-bone(on the other grill) and went inside to eat, seeing that my temerature was fine, and there was ample smoke. Upon completion of my steak, I returned outside to find the Egg fired up to over 350 degrees. OOPS. Anyway, tinkered with it for the better part of an hour. Only able to get it down to 275, didn't want to play with it too much. Two hours into the process, I decided to probe it. Ruhlman says hot smoke to 150 degrees internal temprature. I figured 2 hours to be roughly halfway. Well, the probe told another story. I poked that poor hunk of meat in about 10 places to confirm I read correctly. My lowest reading was 175 degrees.......What the hell? I removed it and brought it in. The picture is what it looked like 10 minutes out of the smoke. I'm not sure if two hours is the right amount of time, as Ruhlman doesn't offer up any time estimates. But, two hours was enough time tonight to smoke a wonderfully flavored, perfectly cooked pastrami. It looks ok as well. I only just managed to drag myself away from it. But, not before I shoveled about half a pound down my throat. I'm blown away by how delicious this is. I hope I can recreate my comedy of errors to produce another one of these. Seeing as I'm not eating this until tomorrow, I'll steam it then. So, next time you see nice slabs of brisket freshly cut, beware the bug that got up MY ass, or just make pastrami! Oh, also, please excuse my deplorable photography. I bought a new camera, breaking it in. Not that my photos taken prior were anything to write home about. 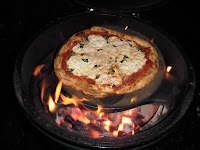 This is what 725 degrees looks like. Larbo may have his Robot Coupe, but I still have the capability to wood fire a Pizza Napoletana at 700+ degrees. You can keep your food processor, I'll take perfect pizza. This really is as good as food can be. Perfectly charred, yet still chewy crust. San Marzano passato with hand made fresh mozzarella. Freshly grated Pecorino Romano. New basil torn by hand. Can't beat it. God bless the Big Green Egg.
Posted by scott at 10:48 PM 1 comment: 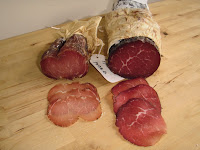 Just pulled about 2 hours ago. Not much to report, just 2 more well cured creations. The bresaola has the faintest hint of clove, just enough that's it's pleasurable, not off putting. The Tyrolean cured lonzino is very good as well. Nothing too overwhelming in the flavor profile there. I'm not much of a braggart, but, tough to argue that these are anything but well done, they look and smell perfect. They are delicious as well, just had a bunch of each drizzled with some fruity extra virgin olive oil and shaved parmigiano-reggiano.
Posted by scott at 4:31 PM 9 comments: 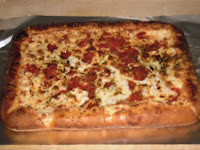 I am a self professed pizza snob. However, I find most of what is made commercially to be abhorrent. Half-baked crust, topped with rubber mozzarella(no relation to the real thing). Lifeless, flavorless, tomato sauce combined with cardboard, saw dusty dry oregano. If you're really lucky, you can get pizza from a chain, where the dough is more closely related to Twinkies than pizza. Disgusting. These bastardized recreations bare no resemblance to the original creation. There are only a handful of places I will eat pizza out. All of those establishments feature some sort of brick oven, either coal or wood fired. Lombardi's and Arturo's in Manhattan make the list. For me, though, the best is Totonno's in Coney Island. They feature a coal fired oven that is over 100 years old. Perfectly charred crust, fresh mozzarella, and crushed tomatoes.............perfect. So, I've resorted to making my own, almost exclusively. I know, looking at the picture, you're saying "that's not Pizza Napoletana," and you're right. I happened to stumble across this recipe at Serious Eats. It looked so wonderful, I had to give it a shot. You can see it here:http://www.seriouseats.com/recipes/2009/08/sicilian-style-square-pizza-pie-recipe.html?utm_source=Serious+Eats+Weekly+Newsletter&utm_campaign=4c98b02599-Serious_Eats_Weekly_Newsletter_August_17_2009&utm_medium=email, I wish I knew how to abbreviate links. Anyway, it's a little labor intensive for those who prefer ease of use, but, well worth it. I followed the instructions for the dough, but, went my on way as far as topping. I used fresh mozzarella(grated), Pecorino Romano, San Marzano passato and finished it with wild Sicilian dried oregano. Any other pizza fanatics out there should certainly give this a spin. I'm sure glad I did........3 separate occasions.
Posted by scott at 2:47 PM 6 comments: 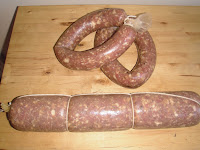 After finishing the last of my sopressate, I discovered I was all out of salami. I liked it so much, I decided to go back to the well. However, as I mentioned in that post, it really never developed the heat I like. With further alterations to be made to THAT recipe, I could no longer call it the same thing. So, let it be called salame pepato! I used 4 different kinds of pepper for these. I went from .4% dried Calabrian chili powder all the way to 1%. I raised black pepper from .4% up to .5%. White pepper .2%, and finally crushed red pepper flakes from.1% to.2%. Obviously, I'm hoping to turn the heat up on these. I also threw in some garlic and red wine. I used bactoferm F-LC as my starter. They are currently fermenting at a touch under 70 degrees, where they will stay for 48-60 hours, depending on how they appear. The big one is a 70mm collagen, the 2 smaller are 43mm collagen. They have been sprayed with M-EK-4 mold spray as well.
Posted by scott at 4:15 PM No comments:
Newer Posts Older Posts Home
Subscribe to: Posts (Atom)