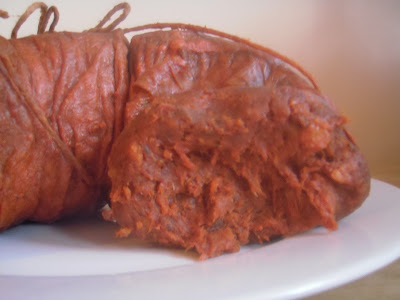 Finally! I was able to bring one all the way to completion done correctly. This is my 4th effort. The prior 3 have been documented here. But, I'll save you the time of tracking them down and give you a quick rundown. My first attempt was terrible. The fat proportion was akin to that of a regular salame, that alone, I believe, was enough to harden it enough to render it unspreadable. It was stuffed in an artificial casing, which did NOT shrink at the same rate as the meat. This caused giant mold covered gaps in the salame. So, on to #2. Again, the fat content was low, higher than the first one, yet still too low. This was stuffed in beef middles and at least they behaved properly. It tasted pretty good, but, was not spreadable. #3 was very promising, I revised the meat recipe and decided to use strictly jowl meat. The hot pepper component was 30%(combination of Calabrese peperoncino paste and powder). Stuffed it in a beef bung, which looked and worked very nicely. Where I screwed the pooch was fermenting. I put a light in the fermentation chamber. It got too hot and what I was left with was a big red water balloon. I opened that one up a couple months ago. I've been using it ever since in various cooked dishes with fantastic results. I'll move on to the latest. This was executed exactly the same as the 3rd. It was fermented for 5 days @ 70 degrees. I left it to dry for 5 months. Where I deviated from the traditional preparation is in the smoking. I didn't have cold smoking capability from the outset. I could have smoked it on the Big Green Egg, but, that could only be held at roughly 100 degrees. Bearing in mind that I destroyed the 3rd N'duja with temperatures on 90 degrees, I decided to wait on the smoking. I was unable to cold smoke all summer as it was an unusually warm summer. However, there was a week when it rained for 4 straight days and the temperature never climbed above 80 degrees. Luckily for me, I was ready to cold smoke a speck belly at the same time. So, even though it had already been dried, I decided to cold smoke it for roughly 22 hours. Surprisingly, the smoke did actually impact the flavor of the meat. Only thing I would change about it is the grind. I only ran it once through the large die of the KA grinder. I think a second run through would be perfect. There are just a couple of larger pieces that are slightly challenging. Overall, a very succesful project. On a similar note, I will be IN Calabria in October, I plan on spending a day in Spillinga asking questions and taking notes and pictures so I can really get this thing dialed in.
Posted by scott at 6:59 PM 9 comments:
Newer Posts Older Posts Home
Subscribe to: Posts (Atom)