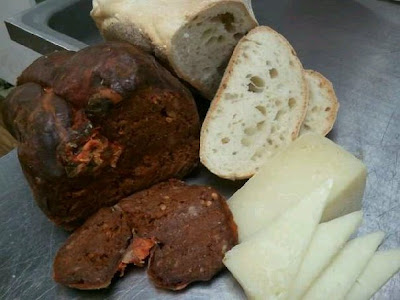 This was totally unnecessary, yet irresistible. Again, I refer back to that lug of scraps that Mosefund Michael gave me. As I wrote in the guanciale post, there were quite a few jowl and belly scraps. I really wanted to do something spreadable with them, and I was leaning towards Ciauscolo. I mentioned this to Michael, well, I don't think I got the words out of my mouth and he blurted out, 'Nduja!" Very well then, sir, 'Nduja it would be. Readers here most likely find 'nduja pedestrian at this point, as I have littered this blog with 'Nduja posts for well over a year and a half. But, this one was going to be different. First of all, I had just returned from Italy having eaten 'Nduja in 3 different locations in Calabria, and was ready to knock it out of the park. Secondly, using this meat is just a silly extravagance.

As written in my blog about chasing salumi in Italy, 'Nduja was the crown jewel in the salumi holy grail for me. At my uncle's house in Santa Cristina d'Aspromonte, he told me to go to a small salumeria in Gioia Tauro. He failed to mention the dirt roads through the dark fields at night I would have to navigate to find said salumeria. Finally found it, then drove right past it. So, I spun around and drove the wrong way down a one way street to get to it, then parked on the sidewalk. Anyone else alarmed by this? My wife was. This is not normal behavior. I ran inside and took the last one in the case along with a loaf of bread. Went back to the hotel and after having a rather large late lunch at my uncle's house, my wife and I devoured the entire thing with the bread for dinner. The next day, I was to go see my aunt and a couple of cousins in Reggio. On my way, I spotted a random salumeria. I thought, "oh no way I'm passing by this place." Unfortunately, I was going about 40. So, I slammed on the breaks and the tires squealed really loudly, then my wife asked me politely, "What the F$#& ARE YOU DOING!" I just pointed and ran out. I saw her shaking her head as I ran inside. Got a really good one there. Brought that to my Aunt's house and ate a bunch at lunch and left her the rest. When I went back to Scilla later that night, we went to the little gift store in town. Guess what I found? Yep, "'Nduja di Spilinga" in the jar. I'll let you know how that is when I open it. I'm weird, I feel like once I open it, it's gone forever. Instead, I just stare at the jar, wondering. While still in the store, I asked the woman where I could find the best 'Nduja in a 10km radius. She told me there was a small butcher up the road in Bagnara Calabra. Off we went, begrudgingly for some. I'm still not sure how I found it, it really was a SMALL butcher shop. Bought 2 from this lovely gentleman, who coincidentally lived in NJ for 4 years and still has half his family there. We destroyed one of those on the ferry to Sicily the next day. I don't know what happened to the other one ;) In a nutshell, there is some background on 'Nduja and me.

As for production. There really were a lot of scraps in that lug. I think I salvaged 7lbs. of usable belly and jowl scraps(after skinning and piggy hair removal). Which is a perfectly round number if one is going to make 10lbs. of 'Nduja. I ran the meat scraps through the 1/2" plate on the grinder. Not caring about smearing whatsoever, I gave it a second pass. My last 'Nduja, I only ran it through once and was unhappy with the texture, it was stringy almost. Second pass did the trick, the texture of this is absolutely perfect, exactly as I'd eaten in Calabria. For the peperoncino numbers, all my questions and all my reading keep throwing the same numbers at me, so there must be something to them, 60-70% meat, 30-40% pepper(hot/sweet combo) or pepe rosso and peperoncino. But, based on my experience with the peperoncino powder, it mellows dramatically, so I didn't see a need to mess with any of that sweet nonsense. Also, previously I have used "crema di peperoncino," which is hot pepper paste/puree. Again, all reading and research resulted in the discovery that this is not used in the production of 'Nduja, so out the window with that. Now what? That paste weighed a lot more than the powder and made it much easier to get to that 30-40% threshhold. That would be a lot of powder.......who cares, go high or stay home! I went 28% peperoncino powder and 2% crushed red pepper flakes. Also, I added salt, cure #2, f-lc starter and dextrose. These were stuffed in a beef bung and tied off into nice little packages. I fermented them for 72 hours and followed that with 50 hours of cold smoke over the course of 4 days, using a mixed hardwood sawdust in my pro-q smoker. This sat in my chamber for about 3 months and was removed last week. It is delicious and quite hot. In fact, I think Michael is annoyed with me for it being too hot. But, I don't think it's any hotter than what I had in Calabria, and it's not too hot for me. Sorry, Michael! Next up.......Salame di Felino made from Mosefund Mangalitsa(yes, the same scraps).
Posted by scott at 9:05 PM 18 comments: 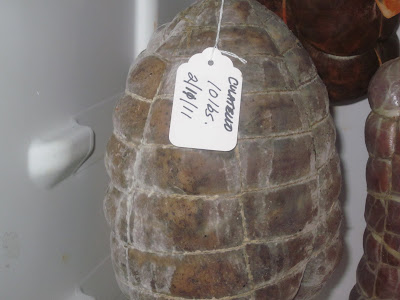 As promised, here it is. This was a bit labor intensive, but, it sure looks good. After curing for 3 weeks, I removed it and scraped off excess salt. I then gave it a bath in red wine for about 10 minutes. Then, the fun started. I stuffed this in a beef bladder. When I removed the beef bladder, I immediately felt a little uneasy. I thought, "oh, no way that thing is getting in there, that's ridiculous." I soaked the bladder in warm water for about 20 minutes. It stretched some, but, even then I thought I was going to be stuffing 10lbs. of shit into a 5lb. bag.......still no way. I proceeded to fill the bladder with water and hold it up, getting it to stretch out a little. I emptied it out and filled it up again. I performed this mundane task 4 times. Finally, I made the decision that if it wasn't going to fit now, it wasn't going to fit, period. I had to cut it down the middle to squeeze it in. Amazingly, it was wide enough to accommodate the culatello. The issue I know faced was it wasn't quite long enough. I had to stretch the end, pulling and turning, pulling and turning. I got out the trussing needle and magically trussed it shut. It looked a bit ugly, but, at least I got it closed. Now on to the fun part.......the tying. I'm not sure I can effectively describe the tying process, so, have a look here this exactly how I learned. Using hemp twine, basically, it's 4 vertical passes, which becomes 8 lines going around the culatello. At that point you start the horizontal passes. Starting from the top, you work horizontally, tying a half hitch around every one of the 8 vertical passes, spiraling your way all the way to the bottom. My horizontal passes are a little wide, I should have done more. But, my verticals are great, they stayed put as I ran my way around doing the horizontals. I think it's pretty impressive for just my second effort. I sprayed it with some mold spray and left it to "ferment" for about 24 hours. I hung it on Friday morning, 2/11/11(says it right on the label). There it will hang for 9-12 months. Look for me to cut into it sometime around Thanksgiving. Sounds waaaaay too long for me.
Posted by scott at 9:32 PM 6 comments: 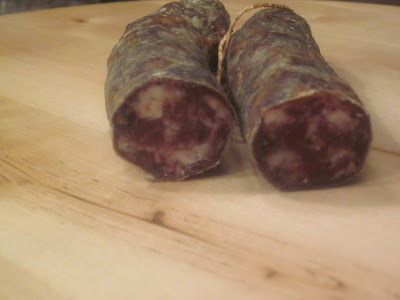 Venison Kaminwurzen. Yes, I'm going to bore you with yet another salume from the Dolomites. If any of this starts to bore you, please let me know. Otherwise, too bad. Everything I had while there I've been trying to recreate. I think I've done a pretty good job, this one included. Kaminwurzen(or Kaminwurz) is typical of the Val Badia and Val Gardena in Sudtirol. It is most often made with pork. However, I read in a couple books while I was there that can also be made with venison or comoscio(which is a native mountain deer). So, when I got a bunch of venison from my cousin again, I earmarked half for Kaminwurzen and the other half that looked like good, solid cylindrical roasts were to be used to make Bresaola di Cervo(venison bresaola), which, by chance, I also happened to eat there as well. Upon opening the venison, I realized that those pieces I intended to make into Bresaola were a little busted up, so, it all got turned into Kaminwurz. On to production. Sticking to my recent pledge of austerity, I researched my ass off. Finally, I decided on a real simple one. This has 70% lean venison, 30% pork backfat, salt and black pepper, cure#2, f-lc starter with some garlic, red wine and caraway seeds.............that's it. Cold smoked using the pro-q cold smoke generator for about 50 hours. Again, I used the ground up juniper berries as an addition to the hardwood saw dust. I'm still tinkering with how much cold smoke to lay on these things. I thought 50 hours was quite a bit. But, the several I ate in the Dolomites were noticeably smoky. But, 50 hours was not enough. While the smoke is definitely present, it isn't quite as noticeable as the native salame. Next time I'll give it 70 hours. I really think the juniper WOOD makes the difference. Some day, perhaps. I stuffed these in hog casings, fermented for about 72 hours, then hit them with the smoke. I read that in the case of cold smoking salame that you should ferment at the same time as you are cold smoking. That would be great if it was May in New York. So, I had to improvise a bit just to make sure it was fermented. This dried out for 5-6 weeks. I'm pretty happy with the results. With so few ingredients, it's nice to be able to taste each of them. Great garlic, caraway smoky flavors. Very, very pleasant. Looks pretty good, too..no smearing or case hardening. Try it.
Posted by scott at 8:50 PM 8 comments:
Newer Posts Older Posts Home
Subscribe to: Posts (Atom)