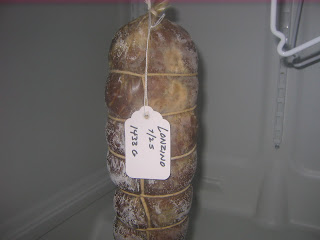 Suspend disbelief, please, I know I'm closer to California than Alto Adige. I cured this with caraway seeds, juniper berries, and anise seeds(salt, black pepper, sugar, and cure #2 as well). After poring over as many references as I could find, I used spices that seemed recurrent to many of the recipes found in the Sudtirol cuisine. Looking at Len Poli's site, I see he calls for Alpine herbs, which consists of hyssop, melissa(lemon balm), marjoram, and sage. Since I have neither melissa nor hyssop, I went with the more readily available, more frquently mentioned spices. This lonzino is pictured less than 24 hours after it was hung following a near 48 hour fermentation period. It was stuffed in a 90mm collagen casing. I promise as soon as I burn through these collagen casings I'll shift over to the more authentic, natural casings. I'd really like to be able to "speck" this lonzino. However, I have no way of cold smoking. Also, even if I did have the means to cold smoke, I don't have any juniper wood, nor do I have any way of obtaining any. If anyone has any ideas on either, I'm all ears. 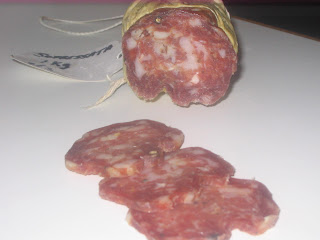 Here is the finished product from my post in June. I think I'm getting better. This one looks very nice. The reason I say I'm getting better is people who were intitially a bit skiddish of the whole operation were downing this by the handful. I must say, tastewise, this is exactly what it's supposed to taste like. Just salty and porky and delicious. Ate a bunch of it paired with some Fiore Sardo cheese. Perfect. I made this with a bunch of dried hot pepper powder in it. Still not that rosy red color. It IS hot, but, I could take even a bit hotter. Guess I'll give it another go.
Posted by scott at 9:50 PM 8 comments: 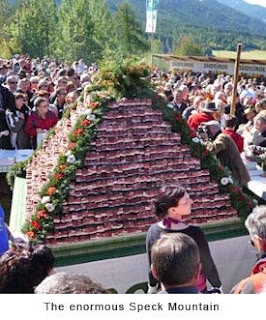 My fiance just returned from several weeks in Italy. Among the places she visited was Sudtirol, or South Tyrol in the Alto Adige region. Now, I was aware that there are various geographical influences throughout the country. Whether it be an African influence in Sicily, or Slavic in Friulli, or Swiss in the Piedmont, etc. What I didn't know, until I researched prior to her departure, is HOW dominant the German influence is in this particular region. I know it was annexed in 1918, but still remains very German. Why is this so fascinating is I have a German name and have blonde hair and blue eyes. Yet, as I've written in the past, I spent a good deal of time in my youth with my immigrant southern Italian grandparents. I even learned to speak the language. Delving into the cuisine of the Sudtirol, I made a huge discovery. This is a cuisine of BACON! My fiance brought home a tiny little cookbook, called "Tyrolean Specialties." In it, I would say 80% of the savory recipes call for bacon, or some type of cured pork product. Amazing. Speck, speck and more speck. This picture of a mountain of speck was taken during a "speckfest." They call everything speck, I guess, and smoke everything. Speck bacon, speck ham, speck loin, and a smoked sausage called Kamminwurzen(see 3rd 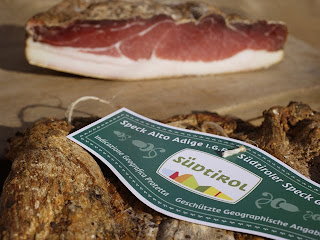 picture below). Canederli, or Tyrolean gnocchi, or bread dumplings made with stale bread. Lots of crauti(sauerkraut), the use of caraway and rye bread. I figured that this is a way for me to leave my comfort zone, while still staying inside my little box(geographically, at least). Being that resources about this region and cuisine are extremely limited, I hope that there can be some outside contributions. Also, failed to mention initially. I cured(or attempted) my first meat of this style. I cured a pork loin for lonzino. It was cured with caraway, juniper and anise seed. 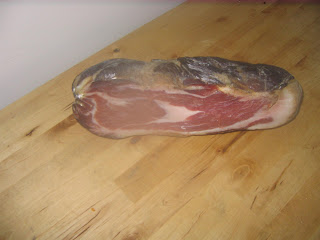 I'd kind of given up on this poor bastard. I left in my chamber for months. I dipped it in the vinegar solution several times, as it had picked up some exterior mold. Every time I removed, it didn't seem to be making any progress. Being that it wasn't such a huge hunk of meat, I was confused. I removed everything from the chamber when I went on vacation. I couldn't leave anything due to me blowing my second humidifier in 6 months. Without a meatsitter changing the hanging wet rag every other day, everything would be rubbish. It sat in a regular refrigerator for a week, where I paid it no mind, actually mad at it for not curing :). Came home from vacation and put some things back in the chamber. I came to the ham and opened it. I finally said screw it, I'm going to cut into it. WOW, it looks perfect. I cut some up and chunked it to be fried up. I couldn't be happier, it's great. Suffice to say, I'm no longer cross with it! It is my opinion that if any of you who read this have any intention on making a prosciutto, I highly recomment starting with this. It doesn't even take one third of the time it would for a normal proscitto, and the taste is definitely a representative example of the vaunted cured meat. This revelation has led me down a new path. I am about to embark on a new endeavor.
Posted by scott at 12:52 PM 5 comments: 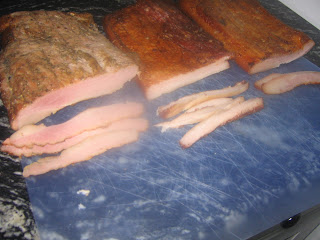 Sorry for my little break in posting. Went on vacation for the better part of two weeks. Anyway, here are the bacons. From left there is the sage, ginger garlic, then the cocoa bacon, and on the left is the rosemary, fennel seed, honey bacon. The sage ginger bacon is a homerun. The cocoa bacon tastes like plain old bacon, the cocoa seems to have been overwhelmed by the smoke. You can kind of smell the cocoa a little, but there is really no taste of it. Still, it's bacon, and it's good. The rosemary, fennel bacon is delicious. The honey adds the perfect hint of sweetness. I really am a little disappointed in the cocoa bacon. I thought at least I would get a backdrop of chocolate. Any suggestions for future chocolate bacon cures are welcome.
Posted by scott at 12:46 PM 2 comments:
Newer Posts Older Posts Home
Subscribe to: Posts (Atom)