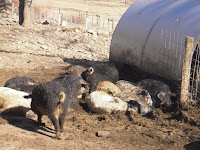 Had the opportunity this past Sunday to visit Michael Clampffer at Mosefund Farm for a tour of the facilities. After a series of swings and misses, we were finally able to nail it dow 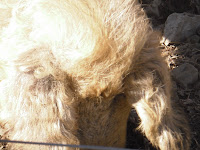 n. Here are the babies. They are held here for some time and subsequently moved to the pen with the larger fellows. This pig on the right is one of the babies that looks to have been born a sheep. He also thought my hand smelled like food, until he tasted it! Didn't stop him from gnawing on it anyway. Here are the bigger guys, napping between meals. They are pen 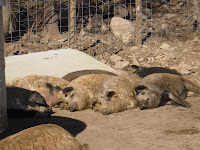 ned off adjacent to the babies. More of the bigger boys, looking like seals on a San Francisco pier. Here is a picture of what might be the coolest feature(for the pigs)in the facility. The pigs are free to roam the surrounding hills. They are all fenced 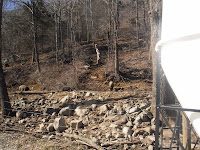 in and allowed to meander and eat, as Michael told me, whatever isn't nailed down. From there we went inside, where the largest pigs are held. They are fed just wheat, barley and acorns until they are slaughtered. I took a bunch of pictures, however, due to the dust kicked up from the ensuing melee created when Michael tossed a bucket of acorns into the pen, none of them are viable. Michael also showed me his curing chamber. I confess I am quite envious as he has an entire walk in closet full of lovely smelling prosciutti. Ok, so, time for business. Where's my meat? Went to the barn to pull some out of the freezer. When he removed some, I laughed out loud. Absolutely ridiculous stuff. This is stuff you hear about or read about, like Lardo di Colonnata. This looked even better. I got a big piece of shoulder, from which I'll remove a coppa and cure the roughly 2-3" of back 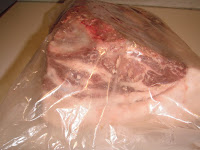 fat for lardo. It is still semi-frozen in the picture, I hope you can m 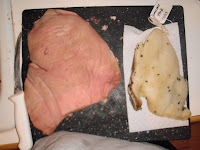 ake out the thickness of the backfat......absurd! I also grabbed a jowl for guanciale, as I find I am a guancialophile. Way too good and huuuuuge to pass on. For a size comparison, I cleaned it up and layed an already cured jowl next to it. This jowl weighs about 1.5lbs. So, you can see it's not like any jowl I've ever seen. I'll post more as I cure these within the next couple days. Thanks Michael for a really cool and interesting experience., and thanks for the delicious lardo!
Posted by scott at 8:26 PM