Recap of my 3 week Salumi tour in Italy 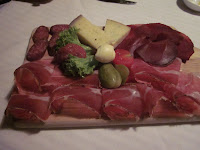 Sorry for the lag in posts. Got married in September, then went eating my way through Italy for 3 weeks(started with a 3 crazy days in Munich for Oktoberfest). So, I'll get right to it. Took the train from Munich into Bolzano in the Alto Adige. Rented a car and went to the Val Gardena. We stayed in Ortisei for 3 days, which is absolutely stunning place and a must see for anyone travelling in Northern Italy. As far as salumi goes, this is probably the most diverse region in the country. I spent about 3 hours in 2 different salumerie, asking questions and buying almost everything. Really, really cool stuff. This first picture was from a restaura 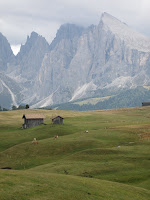 nt called Tubladel. This was speck, kaminwurzen and cold smoked venison bresaola. First, a small lesson on speck and the Alto Adige. Alto Adige was part of Austria until after WW1 in 1919. They still hold strong their cultural heritage to Germany/Austria. In fact, German is the official language. So, while speck in Italy refers to the cold smoked outer shell of a pig's leg, in German, speck refers to bacon. There tends to be a little confusion about what's what. For example, I picked up something called cuore di speck, which was cured, cold smoked pork tenderloin. This is part of the reason I spent a couple hours in various salumerie. What I came to realize is that almost everything is cold smoked here. Pretty much all of which smoked with juniper wood. The next day, we took the cable car to hike the Swiss Alps(Dolomites). Since I'm unable to describe in words what it looks like, I'll put up a picture. After h 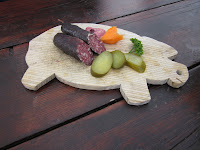 iking for awhile, we came across a small cabin serving lunch. Again, I got some more salumi. Sp 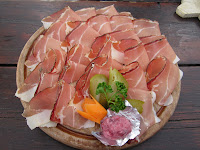 eck and Kaminwurzen this time. That purple stuff on the plate is a mostarda unique to the Alto Adige. It is small cranberries and horseradish. This is fabulous stuff. I was so blown away, I bought a bunch of jars home with me and contacted the company to try and import it myself. On the way back down, we stopped at a salumeria in the little town. I spoke to a very nice and accomodating female norcina. She was patient enough to walk me through almost all of the different salumi produced in the region. I found horse salami, camoscio(which is a chamois) bresaola, capriolo(which is a small deer I'm told) bresaola, cured pork tongue, carne salata(salted, uncured beef), pancetta affumicata, cold smoked pork tenderloin and, of course, kaminwurzen and speck.

From there, we drove to Tuscany. Chianti, to be more specific. Took a road trip to Siena, which is obligatory in my world due to my wife having lived there for 6 months. Found a really nice little salumeria. W 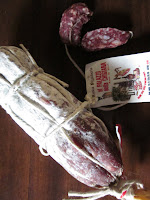 hat I found is that although they do have the renowned Cinta Senese pig, a good portion of the salumi is made with cinghiale(wild boar). I believe they are everywhere, as I saw one trotting on the side of the road one night. This is probably my favorite as far as salame goes. R 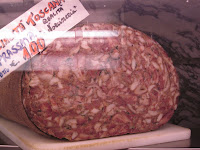 eally big fan. The larger salame in the picture was made with Barolo wine. While still in Tuscany and relatively close to Panzano, we made a stop at Antica Macelleria Cecchini to see Dario. I learned when I arrived that he was married 2 days prior...........too bad. Made our way to Florence anyway. Bumped into another nice Norcineria, where I found some Ciauscolo. I know it's native to Marche and Umbria, but, since I wasn't going to either place, I jumped on it. Especially after the shopkeeper informed me that they DO make it in Tuscany as well, and theirs was the best ;). I also discovered Sopprassata Toscana, which is basically gigantic head cheese.

From Tuscany we travelled to Positano. While before I left Tuscany, I was all geared up to hit Antica Pizzeria Port'Alba in Naples(allegedly the oldest pizzeria in the world), possibly visit my grandmother's hometown of Casserta and maybe even see Pompeii. Plans changed. Those of you who have driven will understand. Once I got to the outskirts of Naples and onto the Amalfi drive, I tried to introduce road rage to Italy. Suffice to say, once I parked the car at our hotel in Positano, I made the executive decision to not move the car until absolutely necessary. I wasn't terribly disappointed, as I don't feel I missed much. Salumi wise, Campania doesn't have the resume of Alto Adige or Tuscany or Calabria. But, I did manage to get some decent Salami Napoli.


Speaking of Calabria, that was the next stop. All I could think about was hunting down 'nduja. I originally planned to stop in Spilinga. But, since my family is located in Santa Cristina and Reggio, we decided to stay in Scilla, as per a recommendation by Rosetta Costantino, the author of the soon to be released c 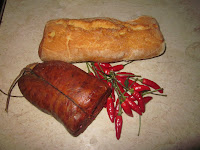 ookboook "My Calabria." Scilla is a really charming little fishing village on the Tyrrhenian Sea. Tough luck finding a salumeria here. No worries, I was also told that you could pretty much find 'nduja on any street corner. I was able to get in touch with some cousins whom I'd never met and they were able to steer me in the right direction for 'nduja. I bought this one from a butcher in Gioia Tauro. I'm pleased to report my own tastes pretty similar and is HOTTER. Aside from Alto Adige, I think Calabria maybe the next prolific region for salumi. Other than 'nduja, I found 5 different salumi with DOP status: Capocollo di Calabria, Pancetta di Calabria, Salsiccia di Calabria and Soppressata di Calabria. I tasted all except the pancetta. One thing they all had in common..............peperoncino, of course.

Hopped on the ferry over to Sicily to spend 3 days in Taormina. We stopped at Mount Etna on the way. Based on the fact that we did an inordinate amount of running around with various day trips and sooooo much driving. We decided that we would shut it down for a couple days. Again, with Taormina being on the sea, I was more interested in eating fresh fish than in finding a salumeria. 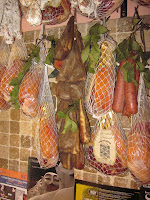 Dropped off the rental car in Catania and jumped on a flight to Rome for 2 days. Got out the Guanciale tractor beam. Locked it in at a super nice Norcineria in Campo dei Fiori. You can see the fat cheeks hanging in the middle of the picture. I spent 2 days in Rome eating Guanciale in any way you could imagine........carbonara, gricia, amatriciana. Also found the biggest mortadella I've ever seen. 2 days in Rome and 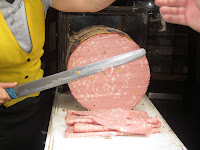 time to go home. I can say that I really learned a lot. I found the salumieri much friendlier and willing to share information than I had been led to believe. So, in a nutshell, there is my 3 week salumi chase.