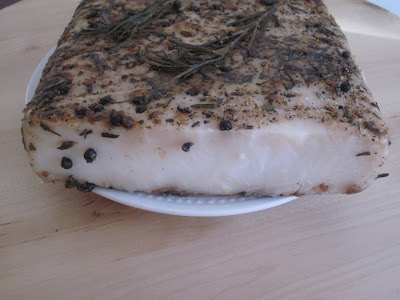 Yet another salumi created from the never ending lug of scraps from Michael of Mosefund. I know it seems like a bottomless pit of usable scrap. But, I won't apologize for the amount of posts I've been able to squeeze out of one scrap pile. It sure does seem like an inordinate amount of salumi, though. Now on to the Lardo. I read up on Lardo di Colonnata again in various sources. Lardo di Colonnata has been granted IGP status in Italy. Colonnata is a small town near the larger town of Carrara where the famous marble is mined. Miners would take a piece of lardo with them to eat while at work. It would then seem to make sense that they use marble curing bins or a "conca di marmo" in Colonnata to cure their Lardo. In the absence of said marble bin, I would have to make due with a heavy duty tupperware container. Same concept, but, the marble bin is a lot cooler, oh well......soon enough. After trimming it and squaring it off a bit(a very little bit), I cured it in the style of Colonnata. Which is to say, I was inspired by Colonnata, but, being from NY and not Tuscany, and depending on the norcino, cinnamon and clove could be included in the curing process. Since I have a bit of an aversion to both when used in curing(I feel they overwhelm), I kept to my recent theme of austerity. Starting with the curing, I did something I've been doing recently, I cured with only salt and cure #2 for a period of time........17 days this time. Put it in the tupperware container and off to the chamber. Curing completed, I rinsed off the salt and cure, then added the concia, or spice mix, which in this case were garlic, rosemary, black pepper and bay leaf. I threw it back in the tuppperware into the chamber for over 2 months. I kind of forgot about it, honestly. When I was lamenting the end of the "scrap heap salumi, " I remembered the lardo and thought, "How the hell did I forget about that?" I think this is the simplest of all salumi. Throw a little salt on it, put it in tupperware and forget about it. Of course, I'm not sure it would be effective if you did this with fatback from the supermarket. I am just lucky enough to have a giant slab of mangalitsa fat to play with;). The strangest thing about this fat is how quickly it gets soft......almost instantly. I really wanted to cut a few slices thinly with the machine, but, the lardo doesn't cooperate. Coming out of the chamber, as soon as you handle it, it wants to get soft and melt on you. What I've discovered is to put it in the regular fridge for awhile to stiffen it up. On that note, it's actually safe to cure Lardo in the regular fridge as it has little to no moisture in it. After an hour cool down, I was able to get a couple real thin slices. I toasted up some crusty bread and watched the magic as the lardo makes contact with the warm bread. It turns translucent and melts into the bread. Awesome. Luscious, fatty deliciousness. If you're able to get your hands on some quality fatback, this is a must.
Posted by scott at 4:24 PM