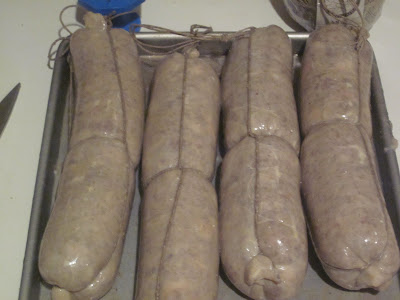 Yes, new year's is Cotechino time. To recap my journey into this meat insanity, this is the actual sausage that launched me. Several years ago, I received both the meat grinder and sausage stuffer attachments for the kitchen aid stand mixer as a Christmas gift. Several days later, I was looking high and low for Cotechino. I googled it and found a recipe for it. Only problem was, it was a recipe to actually MAKE it. The old light bulb went on and thought, "I can make that, I have the grinder AND the stuffer." and I went and bought the book in which the recipe was contained. So, cotechino was the first sausage of any kind I ever produced. It was not produced well, however, in fact, it was terrible. I was unaware there was such a thing as a cardboard sausage. Oh well, my first sausage.......mulligan. Last year, with a little more experience under my belt, I made Jason's Cotechino, and it was terrific. Well, this year, I got a real treat. I have been corresponding with my cousin in Milan. He told me he was able to procure a recipe from an old norcino and was nice enough to give it to me(really the only reason he got it was because I asked him to). Oh, and don't ask me any stupid questions, like, "Can I have the formula?"......not happening........forget it! Here they are. I used a combination of jowl, some shoulder, and raw skin. Had a bit of trouble getting the raw skin through the grinder. Even a commercial grinder didn't really want to play. My first effort to grind it just thrashed it up quite a bit, so, I had to go up in die size just to get it through. When it came time to spice it, I had a little surprise waiting for me. Typically, cinnamon is used in almost all cotechini. Surprise! Wifey decided to toss out my cinnamon and not tell me, sooooo bush league. Slightly irritated, I went with coriander, clove, ginger, allspice and mace, along with salt, black pepper and white pepper and some pink salt. Thankfully, the formula only called for various spices that differ from, "norcino a norcino," so, I can pull the old Norcino license card. They were stuffed in beef middles. Decided to get even more authentic and use some hemp twine, they look even better, cotton's out! I'll let you know how they taste when they are eaten on Saturday along with some obligatory lentils.
Posted by scott at 6:03 PM