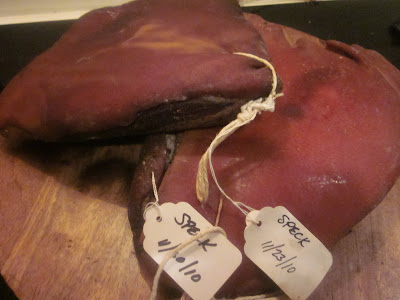 I finally committed myself to attempting a leg speck project. This was always a salume high on my list, but happen to be a bit ignorant in the butchering department. I should say incompetent and/or not confident as opposed to ignorant. I know what it is, just don't know how the hell to harvest it. Well, my oft-mentioned salumeria owning friend bought a couple hams on which to practice. After staring at an already completed speck from Alto Adige, he got to it. That would be the speck on top. The following week, I guess he got the bug again, he called to tell me he had yet another even larger speck, which is the big boy on the bottom. Little speck was cured with rosemary, fennel and juniper. After I cured little speck, I wanted to kick myself for being stupid. When I was in Ortisei, I went into a small supermarket. There was a rack of cookbooks. I flipped through the Italian cookbooks(Italian or German were the choices). One of the books had a chapter dedicated to speck. There was an entire page with a step by step speck walk through. I completely forgot about the book until after I put little speck in to cure. Lucky for me there was big speck. This was cured with garlic, juniper, bay, anise, fennel and caraway. They were both cured for 3 weeks. At that point, they were rinsed and left out for a couple hours to develop a nice pellicle before getting hit with a boatload of cold smoke. I gave the pro-q cold smoker a good workout, smoked every day for almost 3 weeks(only 2 of which were for the speck). I used some mixed harwood dust along with some ground up juniper berries. The juniper berries were a suggestion of Kristoph Wiesner passed along to me via Heath Putnam of Wooly Pigs. I had to settle on the berries after my desperate search for the actual juniper wood didn't pan out. But, I will state that the berries definitely worked. The smoke released by the berries were pungent, exactly what I was going for. 50 hours each of cold smoke and they were hung in the chamber. Look for me to crack these open some time around March-April.
Posted by scott at 7:00 PM